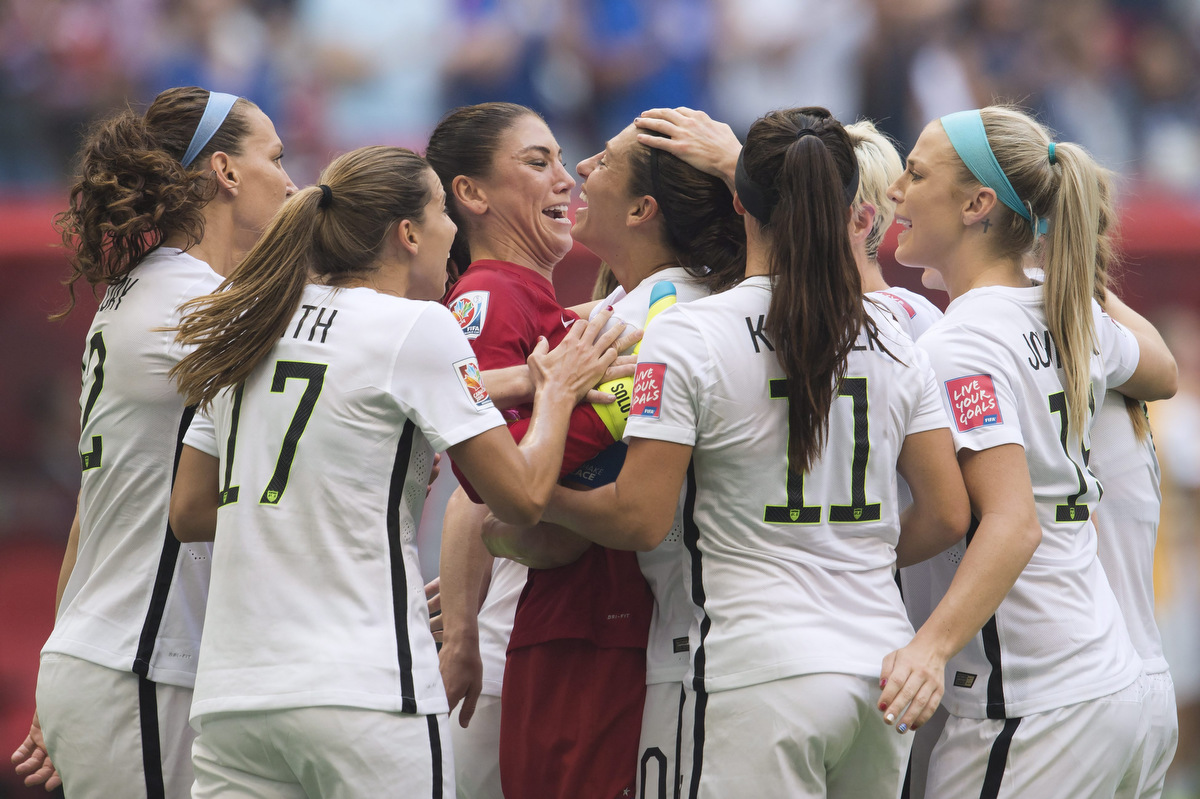 United States' Carli Lloyd, center, is mobbed by teammates as she celebrates her third goal against Japan during the first half of the FIFA Women's World Cup soccer championship in Vancouver, British Columbia, Canada, Sunday, July 5, 2015. (Jonathan Hayward/The Canadian Press via AP)

Companies don’t generate value –  people do.  Your role as a manager is critical for aligning, motivating, and empowering your team to succeed.  It’s half way through the calendar year. How is your team doing? How is each individual team member doing? Is your team coming together or falling apart?

Empirical research shows that high performing teams and individual team members are more successful when they have what I call “AC2E” (pronounced “ACE).  I define ACE as:

For a team to be “an AC2E team”, it needs a “Builder” as a leader. Teams do well when they have a manager who builds the team up. Builder managers understand the strengths and development needs of each individual team member, provide timely feedback and coaching, share credit for accomplishments, and work with their teams to overcome obstacles. “Builders” keep the team positive, energized and moving forward, even in the face of overwhelming obstacles. By being builders, managers create competence, superior performance and value for their organizations.

What a manager says or doesn’t say, and how she or he says it, shapes the culture of the team. Your team can have a culture of high performance, confusion, wait and see, or dog-eat-dog—it often depends on the culture set by the manager. Teams that have builders as managers are teams that win and create value!

Someone out there is saying, “Hey, wait a minute!  What is all this “AC2E” stuff? I thought great teams were staffed by intelligent employees who are experts in their fields!”

To that I respond, “Of course!” These attributes are important initial criteria for team membership, but by themselves do not create high performing teams. In fact, the brilliant expert who cannot listen, empathize, or who dominates discussions is often a detriment to the team and can even be the cause of its failure.

We often see great examples of “Builder” managers in sports—where the development of players, teamwork, the leader’s strategies, the leader’s agility, and the team’s ultimate performance, are visible to the world.

If you are a sports fan, just for kicks, reflect on how Steve Kerr, the first year coach of the Golden State Warriors, led his team to the National Basketball Association championship over the Cleveland Cavaliers.  The Warriors dominated the NBA with strong defense, fast break attacks, teamwork, and constant encouragement from Kerr and his coaching staff.  But Cleveland was able to slow down the Warriors by the dominance of LeBron James and the Cavaliers’ big men.  Acting on a staff member’s suggestion (which shows he is a great listener!), Kerr replaced center Andrew Bogut and small forward Harold Barnes with the faster and more versatile Draymond Green and more experienced Andre Iguodala.  This shift enabled the Warriors to dominate in speed and scoring, without giving up defense.

Another 2015 champion sports example of a “Builder” manager is the coach of the U.S. soccer team. In the Women’s World Cup, Jillian “Jill” Ellis, like Kerr, emphasized defense. Like Kerr, she shifted her tactics and starting players. When it became clear that the team needed more scoring to win the World Cup, Jill changed the team’s formation to promote more offense.  She also changed the team’s strategy from attacking up the middle to using the flanks (sides) to move the ball up the field. Her shift turned the offense loose, specifically striker Carli Lloyd, who scored the Women’s World Cup first “hat trick” in the championship victory over Japan.

Back to your team. If the performance of your team leaves its year-end success in doubt, do this audit:

It is not too late to change your tactics and coach your team and build your team into a winner!

What obstacles does your team need to overcome? What are your winning success stories?

Victor Assad is a strategic human resources consultant and executive coach who works with key decision makers and human resources leaders on talent management, accelerating change, leadership development, and other strategic initiatives, such as mergers and acquisitions, strategy implementation, and flexible workplace.